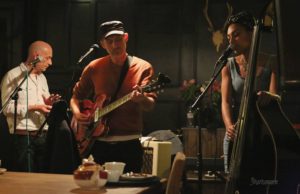 The Spirit of Song

The aboriginal “songlines” are said to be a way of mapping and memorising the environment with important signs and magical properties in order to navigate their way to and from sacred places and to keep the land alive. The modern popular song is surely a mapping of the psyche and whether the signs are for sex, heartbreak, murder, anxiety, protest, wealth, meaning, escapism or love – or all these at once – the modern psyche is now a perilous terrain. Operating under the high noon or the setting sun or the twilight of post industrialist capitalism and whether the psyche’s ‘song signs’ are the unconscious propagation of societies relentless mechanics, a violent reaction to it or even the neutral observation of its shifts, personal demands and dramas, the song sings itself to realisation. It keeps the psyche alive.

Interesting to note the suggestion, by some, that “singing” came before speech in early humans. Not hard to believe considering most animals communicate through a vocalisation that’s nearer to singing than talking. And even the empathic sing song babble directed to an infant; what is essentially being said? – I am here: I am with you.

In all living song there must’ve been an original spark of inspiration, an urgency of communication either for its own sake or the process that is guiding it towards a more perennial philosophy. It seems even the medieval troubadour song of courtly love were a reaching for the divine – not lost on Dante and his song for Betty.

Some songs resonate with some people, some songs resonate with a lot of people, some resonate with no one. The reason for this could be more complex than that of quantum mechanics. We can account for sociocultural circumstances in which the very short contemporary history of changing popular (or alternative) musical attitudes develop a particular sound that is at the moment relevant to an audience that is at the moment “relevant”. We can account for the way a song is technically built, the phonological, melodic, rhythmic, semantic, tones and changes, why this particular song has resonated with certain people (qualitatively and quantitatively). We can understand the sonic references as a guide that either excludes or initiates an audience. But there seems to be a mystery at the very heart of the matter. The matter we can take apart and analyse, the heart is always left mysteriously evading any final explanation.

My friend, outsider artist and archivist Mark Hewitt told me once in a conversation about his extensive and almost obsessive archaeological vinyl collection that he felt that he was collecting more than records – that he was collecting “spirit”, or at least the documentation of spirit through a burst of music captured by a moment on record. I fucking adored this but what the hell does he mean?

Of course, we know what he means but we actually can’t say what he means and neither can he. Where does this “spirit” come from and what precisely is it? The work surely has to be put into a song for it to exist but again what is this work, what is the impulse? Not everybody who plays a musical instrument or can “sing” feels they can or want to write a song. Others have plenty to say but can’t or don’t want to say it through song. There are as many purposes as there are songs to give them expression, but in the end a song has to move you for it to have any substance. Why it will move you and how it will move you is maybe down to lots of things personal, historical, cultural, technical but the effect of being moved through a collection of sounds and words is a profound experience and surely a mythic act.

For me the song whether it be 2.30 min long or 12 min long is one of the highest achievements of human creativity. A bold statement I guess but there are not many other artistic forms that have such efficacy semantically, emotionally, democratically with such enduring flexibility as the song.

Song can have such impact in the most direct way in the shortest of time. It can deliver the grandest of narratives with the minimum of words. It can grandiose the trivial and trivialise the grand. It has the ability to be a communal experience and a solitary one. It can mend you or break you and it can do it with an orchestra or just a single voice. The song is at once fleeting and ever present.

Architecture can succumb to flames, extreme weather, demolition. The plastic arts are also vulnerable to time and corrosion. Novels, films, plays can all be powerful but its unlikely that you will restart a novel, play or even a film directly after you’ve finished it. A song that has gripped you and swept you along with its whoosh, its duende, its Brahman will be played immediately over and over again (and that could be Nacht und Träume or Rama Lama Ding Dong). A song, because it’s a comparatively short movement in time rather than a static edifice or a very long process that you can pause and come back to, can hold its intent in real time. You could say the song is more similar to the short story or more obviously to the poem but the difference is, unlike the poem, the song has music as its primary material and as Leonard Bernstein suggested – from the very first note music is already art because it has no literal meaning. Whether it is good or bad art might depend on the choices of notes that follow and its cultural- historical context but music is already and always going to be what poetry longs to be.

Now back to this spirit of music, spirit of song. Where can it actually be found? – we can look closely at the matter and ask when a voice interrupts and astonishes us or after awhile draws us in and mesmerises us, what are we responding to? Are we responding to the specific sound that particular vocal chord makes? – meaning the biological apparatus that went into building, developing and operating that unique individuals vocal sound; their genes? Or their cultural setting giving them a particular accent that has fashioned their vocalisation in this or that way; their character? Their training and hard work on top of their instinctive ability? their supposed lack of instinctive ability and lack of hard work? Their painful desire, nay, need to sing and the passion it evokes? their understanding instinctive or otherwise of vocal tricks and tools to convey the song? Maybe all of these things or maybe none of them. All we know is we are moved and being moved we feel alive. The vitalising experience of the song is arousing or comforting or disturbing but a connection has been made and in that moment we are, I would suggest, at our most spirited, our most spiritual.

Even war songs, not just commemorating war but pre-battle songs sung to draw the right spirit in and fill the warrior with the psychosis needed for the fight. And we all know life itself can be that fight.

Of course the response could be that Soul music conjures the same feelings as Gospel but the message is entirely different and entirely the issue. Gospel sings in order to arouse you, to open you, to bring you to the specific word of the New Testament – whereas Soul is purely devoted to the humanistic word of the sensual. But I would argue that all song is devotional, in the end and in origin, to the spirit – how that spirit is dressed for the purpose of the context is a matter of the Völkergedanken. The immediate and particular surroundings will need to be expressed but it’s the spirit that moves the songwriter to express them.

Song writers usually start out with clear definitions of what good and bad in song is: Confidently, sometimes even violently they discriminate these terms. Interestingly as they grow more experienced the prejudices fall away and discriminations become less definite – One polemic is because they sell out or wear out or lose their relevance and cutting edge – this could be true in some cases and of course a cutting edge is by point of fact on the edge and cutting through to new ground – but this usually belongs to more energy than experience and although energy is the dynamic needed for the transition from potential to creativity to realisation – the experienced knows that new ground very quickly becomes old ground and what’s left to posterity is the perennial – the spirit of the song.

Devoted song writers always have their ear to the ground or sky, hearts or heads for the muse and the muse’s home is the perennial, but the curious paradox about the eternal is it seems to be forever changing – a sentiment not lost on Ovid or Love.

I think no songwriter knows, really knows, how it is they do what they do and neither should they. Its not really their business to know its their business to do. Whether a song successfully achieves its intended realization – or whether it achieves successfully a completely unintended realization – or whether it ever finds ears to hear – is going to be down to a collection of mysterious forces (and not just crude “market forces”) but what the Orphic Greeks may have called moira.

The modern songwriters’ credo, among many others, is “three chords and the truth”. Does this mean as long as they write from a point of view of confessional honesty, or from how they’ve honestly witnessed the dramas of the world, or sincerely how they see themselves and express themselves with a raw openness and master at least three chords, they then shall have a chance of writing a powerful song? Perhaps, but so much more will either get in the way or will have to be picked up on the way. And also so much less. One beat, one mic and the truth.

The alchemy of songwriting can be unrewarding – Mud can sometimes be transformed into gold but very often, no matter the effort, knowledge and honesty, mud stays mud. And sometimes water becomes wine purely by accident.

Some songwriters will never play an instrument their whole lives, some will always have to collaborate. it stands to reason that no song is written in a vacuum and all are somewhat collaborative – maybe this is why it can be said of a person to be “the voice of the people”, “a voice of a generation” and why certain songs just float about of their own volition without being assigned to any particular author. And anyway the author of a song is surely a legal contractual financial invention – or vanity.